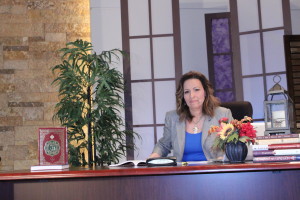 Broadcasting Christian satellite TV programs is one of the most effective means of reaching large numbers of people and penetrating unreached areas and “closed” people groups throughout the world with the gospel of Christ today. Millions in the Muslim world are responding to the message of Christ through programs hosted by indigenous TV hosts. Amani Mostafa, a Muslim background believer and from Egypt, is one of those highly popular and effective hosts.

Amani writes: 2021 marks 12 years for the Muslim Woman program. It has been a journey full of glory to His name.

It has been my pleasure to share the majority of the past 12 years with Sister Farha and sister Marina two godly Women and scholars.They have now moved on to present deferent programs on Al Hayat channel.

From the beginning of the Muslim woman program our goal was to present the gospel and help people to see the fallacies of Islam. We have had many men and women that prayed to accept  Christ live with us on the program and many who gave testimonies of their faith journey with Christ.

Gee is a young Moroccan woman who was taken out of school at a very young age to marry a relative. Her life with him was full of abuse and torture. After she had her first daughter she realized that they are both going to face the same kind of life and abuse with no end in sight. So, she decided to go back to her family and ask for a divorce. Even though her family was well aware of the severe abuse she was under, they refused to help her. But Gee insisted and was able to get a divorce.

As a divorced woman she was a source of shame for the family. Her only relief was her new job that provided for her daughter and herself. There she met a Christian Moroccan woman who gradually presented her with the gospel and gave her a Bible. Gee secretly accepted Christ and immediately felt a sense of freedom even though her circumstances did not change. Shortly after her family discovered the Bible in her room, they kicked her out of the house and took her daughter away from her. Gee was never able to see her daughter again since that day. But she has hope that one day her daughter will come to faith in Christ and they will see each other again

Gee left morocco and went to Syria. There she started to build a life for herself but she did not know how to find someone to help disciple her. One day she went to get her hair done and met the hairdresser Sam. Sam told her that he and his brother were both Muslim background believers. They started helping her on her journey of faith with Christ.

Gee and Sam eventually got married and now have three lovely daughters.Yet again their journey was not without persecution and hardship.They are now refugees in a difficult situation. They had become followers of our program, and we continue to follow up with them and encourage them.

What truly touches my heart is that every time I speak with her, she is always thankful and joyful! She says,“Jesus never fails to show me that I am his daughter and that he always provides for us.”

All glory to His name.

Gee’s story is just one out of thousands, of an individual who has been touched by God, come to Christ, and is being discipled through Amani and her follow-up team. Truth-starved seekers who are interested in learning more about Christ, getting a Bible, or being discipled, write in to email addresses shown Amani’s TV screen, contact her website or Facebook page, or call in to live programs. All of these people need follow-up, and this is where Online Missionaries are being utilized in leading seekers to Christ, discipling the new believers, and ultimately directing them into some kind of local fellowship.

Currently Amani has a fulltime person, Sister Maya, who takes care of all the viewer response for the program emails, phone calls, Facebook and website contacts. [Maya, alone, manages to follow-up with 30-40 people a day through online messages or chats.] She also works with a team of volunteers and distributes the inquiry questions to all of them, who then follow-up with calls, answering peoples’ questions, and connecting new believers to teams on the ground in their own countries where they can make personal contact with other believers, continue to grow in the Lord, and receive Bible and literature distribution. Maya is also able to connect Amani, through the day, with phone call requests from specific viewers on a secured line to her cell phone anywhere she might be. One  example was when Maya recently contacted Amani and put her through to Mohamed from Egypt. as she was shopping in Target. Mohamed accepted Christ and prayed with her right there on the phone.

To handle the 18 million viewer responses from all the program hosts on Al Hayat’s 24/7channel is a daunting task, and requires some 40 phone counselors and online missionaries. Some from their follow-up team receive fulltime salaries, some half or part-time salaries, and a number are volunteers. Currently, Maya works with 11 volunteers who are doing follow-up for Amani. Some of those volunteers could be working regular jobs to provide income for their families and would be greatly helped if they could receive an additional $200-$500 per month. And, in order to keep up with the responses, some new full and part-time people need to be hired.

If God puts on your heart to help, these people on Amani’s team are the real heroes–listening to people’s problems, teaching and encouraging them in the midst of sometimes terrible situations, and taking them down the path from being just believers, to true disciples of Jesus. Please consider making a monthly commitment to support these follow-up efforts! 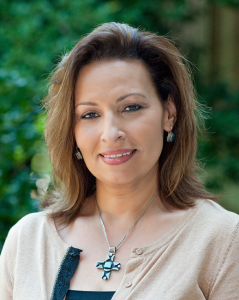 I was born into an Islamic family in Egypt and was barely one year old when my parents divorced. I was left in the care of my grandmother, an educated woman who taught me to think for myself in every area except when it came to our Islamic faith.

At age 13 my life drastically changed when my mother announced she had converted to Christianity. She met the Lord through the teachings of a well-known Coptic cleric named Father Zacharia Botros. My mother was the only Christian in the village. This was devastating for me. I had never heard of anyone leaving Islam and I was determined to “save” my mother.

I would argue and confront my mother countless times, but the change in her life was obvious. She was filled with the transforming power of Jesus Christ and had become peaceful, strong and loving. Soon I realized that I was fighting a losing battle.

In desperation I tried to prove the corruption of the Bible. As a young teenager I began searching the Scriptures for mistakes, but then my eyes were opened. My research revealed the glaring differences between Islam and Christianity.  As I was reading through the book of John, God began speaking to my heart, and soon I fell in love with Jesus and accepted him as my Lord and Savior.

Because of my mother’s boldness in sharing her faith, she was forced to leave the country and not return.  Unable to leave with her, and without fellowship, and afraid that my father would arrange a marriage for me to a strict adherent of Islam, I chose to marry a man who seemed less committed to the Islamic faith. At first he promised to allow me to practice my own faith in secret, but then, after the birth of our two children, I was forced to wear the head covering and instruct my children from the Qur’an in the ways of Islam. The poison I was I was forced to feed them sickened me.

Then one day—miraculously—my husband permitted me to visit the United States with my children, with the promise that he would follow. When I arrived, I rededicated my life to Christ and began to study the Bible like never before. I started attending a church but when my husband heard about it, he demanded that I return. I was forced into hiding for ten years and lived as a fugitive. My husband sent people to find me and bring me back. He even threatened to kill me.

I began to see that with my unique background and experience I could relate to other Muslim women who faced the same struggles that I had faced. I was married for nine years and experienced, first hand, the degradation that Muslim women endure. I suffered abuse and was treated as a mere object. Through personal experience I realized that women in the grip of Islam suffer a life of great pain and hopelessness. 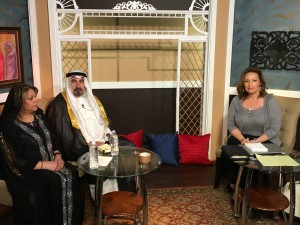 To reach out to these suffering women, God has opened many doors for me.  Through God’s sovereign plan, I was able to reconnect with Father Zacharia Botros.  “Father Z” had his own evangelistic TV program to Muslims—the most watched in the entire Muslim world at the time—with a viewing audience of an estimated 30-40 million viewers per week.  I was helped a great deal by his teaching and his understanding of the Qur’an and the Bible. Eventually, I began hosting several episodes of his program.

Then in September 2009, along with three other Christian women from a Muslim background, we launched the Muslim Women’s program on the same channel as Father Z (Al Hayat channel). Instantly, we had a built-in audience of millions. This 90-minute program includes a call-in opportunity where women from around the world can voice their opinions, share their struggles and ask questions—opportunities they never had before. It deals with problems that Muslim women face and often hide and don’t discuss because of fear.  Here they are finding Christian answers and solutions. Many have come to Christ and are receiving follow-up through the Internet, phone calls and even personal visits.

My knowledge of Islam and Christianity, along with my personal experiences in the bondage of Islam and the freedom I now enjoy in Jesus Christ, have combined to give me the ability to boldly challenge false beliefs with wisdom, love, and respect. The response to these programs has been overwhelming. Never before would I have even dreamed to see this work that God is doing among women in the Muslim world today!