Name of Partnership: Rescuing Women and Young Girls from Lives of Prostitution in Cambodia 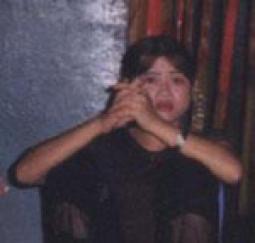 Project Overview: This project focuses on rescuing women and young girls from lives of prostitution in Cambodia. Sometimes this involves buying them back from their pimps and bringing them to a safe-haven an hour and a half away from the country’s capital, Phnom Penh. There they led to Christ, counseled, and receive life-skills and vocational training that will give them a new start in leading self-sufficient and productive lives.

Statistics vary, but according to UNICEF approximately 40000 to 100000 people in Cambodia are involved in the sex trade. One-third of the girls involved in prostitution are under the age of 18. A U.S. State Department report in 2015 titled Trafficking In Persons Report pegs the number of children involved at 8.2 per cent. Regardless of how the numbers are counted, Cambodia remains one of the top destinations for male sex tourism and human trafficking in the world.

Today, many girls entering the sex industry are only 12 or 13 years old. The threat of AIDS continues to drive the average age of prostitution downward, increasing the demand for younger girls. 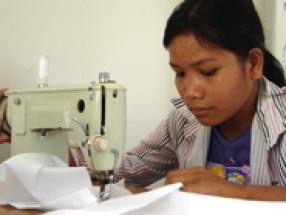 Transform Asia is an organization that helps rescue Cambodian women and girls from lives of prostitution, homelessness, and abuse. They provide them with housing, food, counseling, Christian discipleship, and vocational training that will give them a new start in life. Thankfully, the hopeless situations of many young women in Cambodia are now being exposed, but the threat to their lives will continue without active intervention on their behalf.

The Tragic Story Behind Prostitution in Cambodia 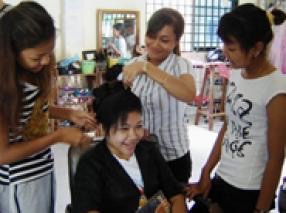 One of the greatest threats to women and girls in Cambodia is the risk of being sold or tricked into prostitution. Astonishingly, it is often the parents of the girls who sell them. Poverty prevails in rural areas of Cambodia and villagers who are struggling to survive will sell their virgin daughters for as much as $700.

Girls enter into prostitution other ways as well. Sometimes they are presented with job opportunities in Phnom Penh only to find that they have been lead to a brothel and forced to obey the every wish of a madam. Without education, skills, or job training, many of these girls do not have the basic skill sets to survive on their own. Once trapped, they see prostitution as their only option.

Some girls are faced with another situations. Those who have been victims of rape often turn to prostitution. Wanting to avoid the immense shame of entering marriage with the loss of their virginity, girls end up leaving their homes and consequently selling their bodies to prostitution.

The girls who find themselves in the brothels are considered the property of the pimps and madams and are sometimes forced to work up to twenty hours a day. They may entertain ten to twenty men per night who may or may not use condoms. Some customers with AIDS have deliberately refused to use condoms and willfully spread their disease. Out of the prostitutes in Cambodia, approximately 68% are sold to their brothels involuntarily. Each girl is given a room the size of a bed which is separated from other rooms by small dividers leaving no room for privacy. If the girls try to run away, the guards that are hired to watch them often beat and torture them. The girls live in a constant state of stress that affects their health as well as their mental and emotional well-being. 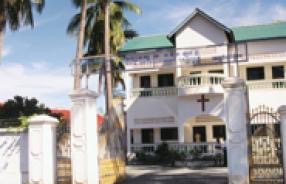 In 1995 Setan Lee started a church located near the red light district in Phnom Penh. Many of the female members of the church were former prostitutes. Sadly, the church was too poor at the time to offer the girls any money that might help them escape from the brothels. The young women desperately wanted to leave their lifestyle, but had no employment skills and no place to live once they left. Most of these women returned to their former way of life. This was an overwhelming agony for Setan and his co-workers. Setan can recount his vivid memories of the tears as he watched the girls leave one by one. He and his people cried out to God as the prophet Isaiah instructed, “When they cry out to the Lord because of their oppressors, he will send them a savior and defender, and he will rescue them.” (Isaiah 19:20) God heard their plea and provided a swift answer. 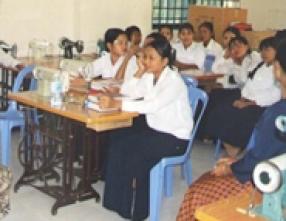 In January 2000, Global Opportunities for Christ received a generous gift to help these desperately hurting women and girls. The gift gave KFC the ability to build a home for women an hour and a half from Phnom Penh in the city of Kampong Chhnang. Almost immediately, God provided more funds that allowed them to drill a well on the property, buy sewing machines for the girls, and to build a protective wall, two dormitories, and a large kitchen facility. These developments were the beginning of the Women’s Center that now provides housing, food, counseling, spiritual guidance, and vocational training to women who have given their lives to Jesus Christ and are looking for a fresh start in life.

In January of 2002, the first class of 26 girls graduated from their yearlong training program. Since then, more than 300 girls have gone through the program. Most of the girls who come to the Center become Christians within a month of their arrival. In addition to spiritual nurturing, they receive training in literacy and life skills such as sewing, weaving, cooking, and hairdressing, which can help lead them to economic self-sufficiency. Many of these women/young girls are now happily married.

In addition to “active” prostitutes, the Center has also taken the pro-active stance of taking in and training girls from poorer families who are most susceptible to the risk of finding themselves involved in the sex-trade industry.

When it is finally time for the girls to graduate from the Center, Transform Asia makes every effort to provide many of them with homes with church families who continue to love and guide them as they continue to grow in Christ and continue their journey toward self-sufficiency.

The dormitory on the property accommodates up to 80 girls. The facility also has a small guesthouse for staff and visitors. Currently there are 24 girls in the program but there is room for an additional 56 girls if funds become available.

Lin Ming Chou’s husband divorced her while she was raising six children at home. With nowhere to go, she ended up living in a train station for a year until she found work at a construction site and was able to live on the land with her children. During this difficult period she heard the gospel and readily accepted Jesus Christ as her Lord and Savior.

Lin Ming had a vision to minister to the disadvantaged and troubled women in Cambodia. For two years she had been praying for the means to begin the work. Her burden was for women who were in prostitution against their wills, and all women who were without hope, abandoned, divorced, abused and homeless.

When her boss found out she had become a Christian he fired her and kicked her off of the land. Setan Lee found Lin Ming and provided her with a sewing machine. She learned to produce Bible covers that were sold in Cambodia and in the USA. This provided enough to support her and her family.

Lin Ming became a valuable full-time worker with Transform Asia. As a church planter and evangelist, she raised up two churches. But her heart remained burdened for girls trapped in the sex trade and women in desperate situations.

Setan and Randa Lee were youth when the Khmer Rouge took power in Cambodia and plunged the country into turmoil and genocide. Both were put into slavery under the Government of the day and survived what came to be known as “the killing fields.” Setan was delivered from certain execution when he called on “the Lord of the universe”. Fleeing to Thailand he was introduced by a “jungle man” to the Jesus Christ – “the Lord of the Universe”. From that moment on, Setan preached in the refugee camp in Thailand to see the church grow to 35000.

Setan and Randa were married in the refugee camp and then came to America where they were blessed with two children.

In 1995 they returned to their homeland to present Christ to the broken nation of Cambodia. In 1995 they co-founded Transform Asia (originally Kampuchea for Christ). Under their leadership the staff has grown from 7 to 200. They have established 36 churches throughout Cambodia, a ministry training center, The Women’s Center for women rescued from the brothels, prevention centers in the Battembang Trade School, Kambour Village Feeding Program, and the David Center—an orphanage to care for the children of the Khmer Rouge. Annual Medical Mobile Clinics and Performance/Rice distribution programs are provided through visiting professionals.

[For a girl to escape prostitution she must often be purchased from a brothel owner. The price varies from $100-$500, depending on her value to the brothel. Global Opportunities would like to provide support for 15 girls at the Center. A full sponsorship for one girl is $84 a month or $1,000 for a whole year.  Full sponsorships, half-sponsorships, or partial sponsorships all help to make a difference in the lives of these girls. This will allow a former sex slave or homeless woman to go through the training program at the Center to become whole again as she works to rebuild her life.]